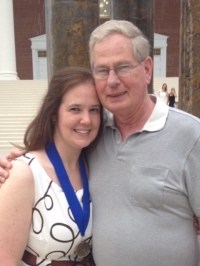 This week’s list is all about this guy! If you know him, you’ll understand. If you don’t I sure hope you get to meet him someday, ’cause you’re missing out!

My father is in the midst of a “nice off” with two of his neighbors.  It all started this winter when Neighbor #1 (aka The Snowman) began plowing my parents’ driveway whenever it snowed more than a couple of inches.  The Snowman lives two doors down, and although he’s been to the house several times, we still don’t know his real name. Men aren’t big on details, it turns out.

By way of repayment, my father, who noticed The Snowman did not own a lawnmower, took over mowing duties at his house. Neighbor #2 (whose name we do actually know), having seen my father mowing The Snowman’s front lawn, appeared one afternoon and mowed my father’s front lawn.

It’s all just so beautifully ridiculous.  And it’s the perfect picture of loving one’s neighbor.

Last weekend I met an aunt and uncle of mine for the first time. Most people will probably think that’s a bit odd, or think there were circumstances that prevented us from meeting earlier in my life, but no, that’s just how extended family works with us.  I have countless cousins I’ve never met either. It’s what comes of my father growing up in a large family that was torn apart by divorce, alcoholism and anger.

But to meet my father, you would think he grew up in a Christian home with parents who loved him, his 5 siblings and each other to death, and loved God even more.

My father is one of the gentlest, sweetest, most godly men I know, but all of that came later in his life. God had a plan for him – and for our family – and so my father met Jesus in his early 20’s.  He and my mother just celebrated their 50th wedding anniversary, and their only slightly shorter walk with God. Thanks to that divine intervention early in their marriage, my brother and I got to grow up knowing Jesus from Day 1.

Music has always been a big part of life in our house. I remember my parents playing old records on this stereo system that was clearly built in the 50’s and was so large, it served as a table for much of my childhood.  Barry Manilow, the Gaithers, and even a bit of Elvis from time to time poured through the rooms of the house like a vintage wine.  Later came CD’s of Beethoven, Mozart, Brahms, and Pachelbel’s Greatest Hit.

My mother sang in the church choir when I was growing up, but my father always said the choir director paid him to usher instead. That doesn’t mean my father doesn’t sing. He sings.  A lot.  And he’s even pretty good at it – with one little catch: He gets the tunes right, but the words? Well, let’s just say, he’s a creative soul.  He sings about cats, cookies, the weather, and once, a particularly hilarious ditty about salmonella, all to the tunes of songs you would otherwise know.

Music is unquestionably a gift from God, and I’ve always been grateful that my parents passed a love of music on to me. I may roll my eyes at some of the words, but I love so much to hear my father sing!

If you ever want to meet someone with the gift of evangelism, let me know, and I’ll introduce you to my father.  I don’t know how he does it, but he is one of few people I know who can ask someone “so, if you were to die tonight, do you know for sure you would go to Heaven” and actually get an answer.  It’s probably because he’s so gentle and sweet and godly.

Time and time again, he has come home from work, the barber, the hardware store, and who knows where else with stories about his conversations with complete strangers that ended with a new brother or sister in Christ. He has this openness to God’s leading that I both admire and envy, and God has blessed him with so many opportunities to reap what someone else has sown.  This gentle, sweet, godly man is bold when it counts, and for him, what counts is the Kingdom.

You haven’t ridden the Tilt-a-Whirl until you’ve ridden it with my father. Trust me…

One of my favorite things to do is just to sit and watch my father laugh. Sometimes it takes a little while for him to get started because he doesn’t always get jokes right away, but once he does, he can’t stop himself. First he laughs at the joke he just got, then he laughs at himself for just now getting said joke.  He laughs on the Tilt-a-Whirl like no one you’ve ever known, and that alone it makes it my favorite ride too.  He laughed so hard he cried at this Mr. Bean sketch the first 10 times he saw it, and now, thanks to him, none of us can sing that song in church without busting up and causing a general ruckus in the rows around us.

Some people guffaw loudly when something strikes them as funny.  Some people cackle.  My father? He has this wheezy laugh that might make you think he was having some sort of lung issue if it weren’t for the fact that his eyes twinkle between scrunched up lids, and his whole body bounces up and down in a joyful dance.

More often than not, if there’s something funny going on, chances are quite good I’m not laughing so much at whatever that is. I am laughing at my father laughing.

I know that many, many people will say this weekend that they have the best father in the world.  And I know that many, many people this weekend will grieve that either they don’t, or their that father is no longer with them (and if that’s you, as I know is true for far too many of my friends, my heart breaks for you on days like today). But I know that God has given me the absolute best father in the world.  He’s perfect for me, and my Heavenly Father knew that before either of us were born.

The Heavenly Father who loves us both more than we’ll ever know how to love each other, hand-picked my earthly father for me and me for him.  He knew we would enjoy Tilt-a-Whirls, talking about Him and the work He’s doing around us, watching fireworks every chance we get, going for bike rides along the canal, and searching the night sky for planets and constellations. Our Heavenly Father, who knows us better than we know ourselves, knew we would need each other, and in His grace and love, He put us in the same family. And I couldn’t be more grateful.